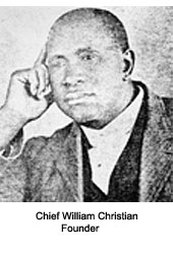 Brotherhood History
At Caine Creek, under a brush arbor near Wrightville, Arkansas in April 1888, a minister named Rev. William Christian having been pastor of a Baptist church in Ft. Smith, began preaching the doctrine of Jesus Christ as laid down in the Bible. His difference of opinion with Dr. Howe, another Baptist minister, caused him to leave the Baptist church. He intended to begin a work known as Christian's Friendship Work but through divine revelation and close study of the scriptures lead him to the truth that the church is known as Church of the Living God. The first members were Elder K. C. Adams who became the first National Secretary, Rev. Josh Adams, Rev. Russell Stowe, Wm. Pierce and Tim Jones, a land owner in Wrightsville. Mr. Shackelford, a lawyer in Little Rock, incorporated the church in the state of Arkansas. Rev. John Christian, the brother of Rev. Wm. Christian, was with him in the early work. In 1895 in Pine Bluff, Arkansas, a difference of opinion arose that caused them to separate. Both maintained the name of the Church of the Living God, one using Motto C.W.F.F. and the other the pillar and ground of the truth following the name. Only by the use of the motto' (C.W.F.F.) in parenthesis is the temple identified as a part of the Brotherhood.There have been numerous secessions, but the Church of the Living God Brotherhood organized by Rev. Christian still is the parent body. The organization itself is non-denominational and non-sectarian. It emphasizes believers' baptism by immersion, the use of water and unleavened bread element in the Lord's Supper and the washing of saint's feet which is required only when one unites with the church. The local organizations are known as "Temple" rather than as "Churches" and are subject to the authority of the general assembly. The presiding officer is styled as "chief bishop." The ministry includes bishops, overseers, evangelists, pastors, missionaries and local preachers, The Executive Board is in charge of the operation of the entire organization, at, the absence of the Annual Assembly. Synod. Annual, General Assembly meets quadrennial 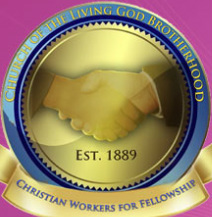